Simply click on the magazine below (if it doesn’t appear in a couple of seconds just refresh this page). 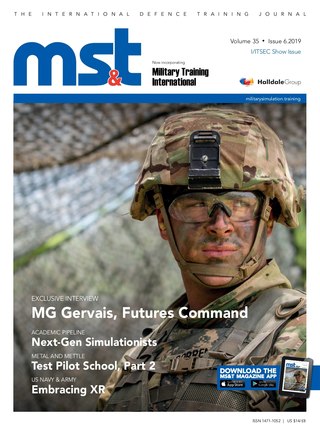 Reading this on a tablet or smartphone? Search for MS&T in the app store

The Academic Pipeline. The use of simulation and virtual reality in education and training today is widespread and expanding.  Where will the next generation of “simulationists” come from to continue the evolution?  Robert W Moorman spoke with world-leading universities.  Part 1 of 2

Autorotation, EOL, and Gunsight Tracking. Empire Test Pilots’ School – Part 2 – MS&T‘s Europe Editor, Dim Jones, visited the ETPS at MoD Boscombe Down to track the progress of the members of the Class of 2019; by the time of this instalment, they were approaching the halfway mark, undertaking more complex and demanding tasks.

Patron Saint of the ‘Flags’. Larger than life, bursting with ideas, “Moody” Suter was a driving force for the Red Flag exercises, the Warrior Preparation Center in Europe and other concepts which are training norms today. MS&T Editor Rick Adams looks at the legacy.

Baltic Gatekeepers: Swedish Naval Warfare Centre. As with many European military services, the Swedish Navy is under-funded, making do with aging equipment and personnel shortages.  MS&T‘s Dim Jones visited Karlskrona to view how the Naval Warfare Training System is helping get the most from their resources.

Immersive VR/AR for High-Risk Sectors. The VR/AR Global Summit in Vancouver is called “one of the year’s most anticipated conferences” by Forbes magazine.  Halldale Group Editor Marty Kauchak ventured to the Canadian coastal city to mingle with the international cross-section of thought leaders and developers.

S&T Growing at Heavy-Metal DSEI. The Defence & Security Equipment International (DSEI) exhibition and conference is Europe’s largest defence equipment show, alternating biennially with Eurosatory in Paris.  Despite the expense of London, the ExCeL appears to be a popular venue for industry and delegates.  MS&T Europe Editor Dim Jones toured the arena.

Seen & Heard. Updates from the training and simulation community. Compiled by the MS&T Editorial Team.